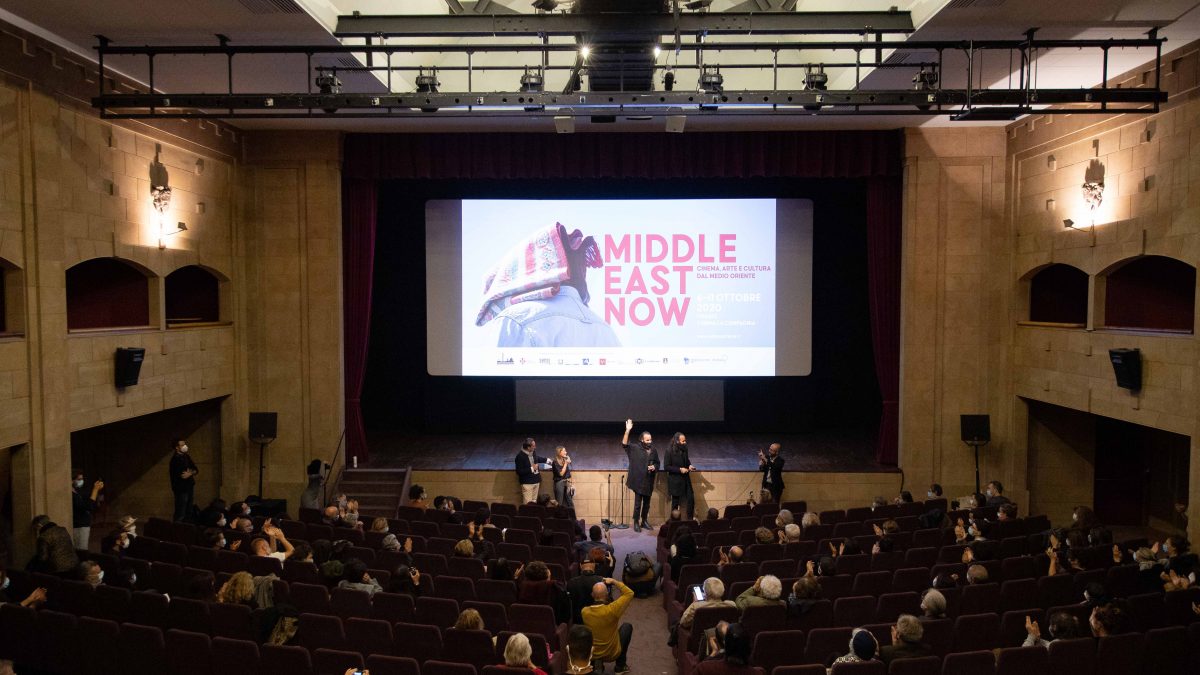 “Between Heaven and Earth” by the Palestinian director Najwa Najjar wins the Middle East Audience Award.

The “Cinema Iran 2020 Award” dedicated to Felicetta Ferraro goes to “Sunless Shadows” by Mehrdad Oskouei, one of the most important Iranian documentary directors.

For short films:
the Best OFF Award goes to “Brotherhood” by Tunisian director Meryam Joobeur,
while the Best Short – Staff Award 2020 to the Palestinian short film “Maradona’s Legs” by Firas Khoury.

The 11th edition of Middle East Now, the international festival presenting the most contemporary Middle Eastern cinema and culture, which took place from 6 to 11 October at Cinema la Compagnia, MAD Murate Art District and other locations in the city, ended with a great success in terms of attention from the audience and the media. Almost all the film evenings were sold out and was large also the audience of the afternoon screenings and matinees, which took place in compliance with the limitations on attendance in the venue imposed by Covid 19 and with all the necessary safety measures. Great participation in the talks and book presentations, the focuses dedicated to comics, the food evening, the opening of the “Seven by Seven” exhibition at the MAD Murate Art District, as well as the many events in the rich program of the international festival directed by Lisa Chiari and Roberto Ruta.

“It is with great satisfaction that we close this extraordinary edition of Middle East Now – say the artistic directors Lisa Chiari and Roberto Ruta – which despite the difficulties and all the complications of the current moment we are going through, has brought us extremely positive feedbacks on the program and events, that came both from our audience and from guests and the press. The experience of bringing the festival online through the Più Compagnia virtual screening room, in collaboration with MyMovies, was also very positive, an additional opportunity for our audience that we will certainly consider for future editions as well. After all, as often happens, new perspectives arise in the most uncertain and difficult times”.

Several international guests also arrived in Florence: from the Iranian director Ahmad Bahrami of the winning film in Venice in the Orizzonti section, “The Wasteland”, to the Iranian documentary filmmakers Sara Khaki and Mohammad Reza Eyni, to the Palestinian-born director Yasmin Fedda, that together with Immacolata Dall’Oglio presented his film “Ayouni”, dedicated to Father Paolo Dall’Oglio; and again the Palestinian twins director Tarzan and Arab Nasser, new stars of Arab cinema, that with their “Gaza Mon Amour” – the closing night film – made the audience fall in love with their original way of telling stories on the big screen. The presentations of the films by the directors were followed by strong Q&A at the end of the screenings. And also, great attention and interest for the focus dedicated by the festival “Middle East in Comics”, which saw the participation, among others, of the Syrian cartoonist Diala Brisly, the talented Italian cartoonist Luca Ferrara, the expert journalist of the Middle East and author Laura Silvia Battaglia and others.

On the final evening, the prizes of this 2020 edition were awarded:

_ the Middle East Now Audience Award, for the film most loved and voted by the audince, went to “Between Heaven and Earth” by the award-winning Palestinian director Najwa Najjar, a road movie comedy about a young couple in divorce, which opens unexpected scenarios on the past and on history.

_ the “Cinema Iran 2020 Award” dedicated to the memory of Felicetta Ferraro, great collaborator of the festival, went to Mehrdad Oskouei‘s beautiful and intense “Sunless Shadows”, shot in an Iranian female juvenile detention center. The jury composed of Germana Rivi, Bianca Maria Filippini and Mario Vitalone, judged it “a courageous documentary for the proposed theme, which opens up a mostly closed doors, beyond which there are young women who have killed, or participated in the killing of violent fathers or husbands. The fixed camera shoots monologues that show us how, once verbally expressed, the facts and feelings that provoked them begin to exist and become, perhaps, something to be reckoned with. And listening is the key to narrative reconstruction. How do you survive the murder of your father or husband? This is the big question asked that continues to resonate with the lights out. “

And among the awards for short films:

_ the Best OFF award, given by OFF Cinema for the best short film, went to “Brotherhood” by Meryam Joobeur, a film about the homecoming to rural Tunisia of a young man who fought for ISIS – chosen by a jury composed by Simone Bartalesi, president of OFF Cinema, Tina Magazzini researcher at the European University Institute and Anacleto D’Agostino, professor of Archeology and History of Art of the Ancient Near East at the University of Pisa – for being able to “tackle a theme thorny, which is typically linked to invisibility or the politics of fear, and to capture its complexity. Brotherhood offers insight into the impact of Islamic radicalization on a young man and his family, but it is also much more.”

_ and then again Palestine for the Middle East Now Staff Award, given by the festival staff that decided to award “Maradona’s Legs” by Palestinian director Firas Khoury: “for the remarkable technical level with which both filming and photography were carried out; for the refined accuracy of the details with which the story was staged; for the different vision of the Middle East that this short has given us, a short that is not for the Middle East but comes from the Middle East. A universal story that talks about children and passions that you want or don’t want unites the whole world ”.